How to Taste and Enjoy Soy Sauce

Our suggestions to help you enjoy the quality and complexity of fresh, artisanal soy sauce are listed below. When tasting soy sauce, I try to notice some or all of these elements. I have developed this approach based on years of tasting small brewery soy sauces as well as traditional techniques for tasting wine, beer and spirits

When I order sushi, I usually ask the server for enough extra sauce dipping bowls for each person to have a separate bowl for each variety of soy sauce we will have with out meal, including the soy sauce served by the restaurant. Much like a wine tasting, I place the bowls in a row and pour each soy sauce in order from the lightest to the darkest to help keep track of which soy sauce is in each bowl. If you are interested in discussing the different soy sauces with your dining companions, it is much easier if everyone’s soy sauce dishes are arranged in the same order.

One of the most important elements of a great soy sauce is that is fresh. Soy sauce is stored in an air tight bottle when it leaves the brewery and remains stable as long as the bottle remains closed. Much like opening a bottle of wine or beer, as soon as the cap is removed from the bottle, fresh air, and particularly oxygen, interacts with the soy sauce and begins to change the flavor. If you smell and taste a soy sauce immediately after it is open and poured, and then again in ten minutes later, you may notice that certain aspects have changed. I find that soy sauce opens up for a few minutes as the various aromatic compounds are released into the air and minor chemical reactions caused by the air change and often soften the flavors.

If soy sauce is exposed to air for too long – hours, days or even weeks, the wonderful volatile organic compounds that give the soy sauce such great flavor will dissipate and the complex aromas will disappear. Even worse, exposure to oxygen will oxidize the soy sauce create unpleasant, off flavors. These flavors are often taste metallic or bitter. It is similar to the process that makes a day old bottle of wine taste completely different from when it was uncorked.

Many restaurants serve soy sauce in small carafes with open spouts that are left on the table or sushi bar. The problem of oxidized soy sauce is particularly pronounced when restaurants use these carafes and fail to replace all of the soy sauce in each carafe on a daily basis. The soy sauce is, in effect, constantly exposed to fresh air, particularly when people pour the carafe into their soy sauce bowl, which accelerates the aeration process by mixing the contents with the air.

Even more disconcerting and destructive to the soy sauce is a practice in many restaurants of topping off the soy sauce carafes at the end of each night’s service. This results in some of the soy sauce being days, weeks and even months old. It reminds me of how port wine is made by repeatedly adding new port to an old barrel whenever it begins to empty. Thus ports that are labeled as being 10, 20 or 30 years old based on the oldest port in the barrel. I have been served soy sauces that were so bitter that I suspected the carafe still contained some soy sauce from when restaurant had opened years earlier.

The flavor of a freshly opened bottle of soy sauce should be bright, clean and complex. Shiso soy sauces come in relatively small bottles to assure that they are fresh. Our soy sauces have a delicate yet distinct yeast smell from the yeast used in the second fermentation. The smell can be reminiscent of a great beer, or a freshly baked loaf of sour dough bread and results from the same biological processes. The yeast smell is ephemeral and dissipates quickly as the hundreds of volatile organoleptic compounds are released into the air to create the complex aroma. 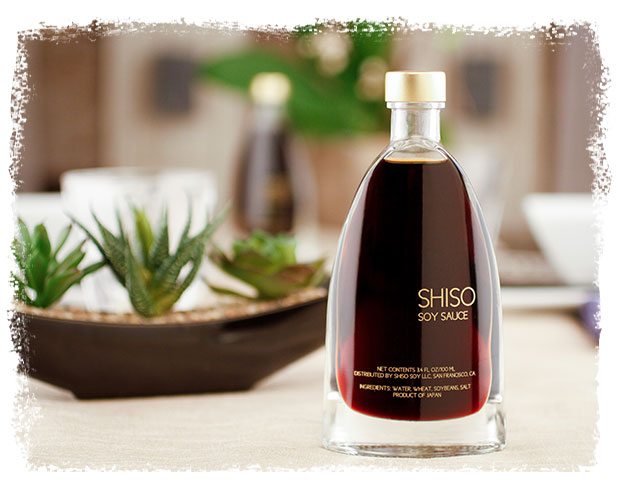 The following suggestion include the qualities that I look for in a soy sauce. You should feel free to develop your own approach when tasting soy sauce or any other food or beverage.

Tasting. Before I begin to eat, I like to taste the soy sauces by dipping the tip of my finger into each of the soy sauce varieties. Each diner should have their own separate bowl for each soy sauce, so double dipping can be avoided with a minimum of effort.

Off notes.Many commercially produced soy sauces have “off” notes, particularly if the soy sauce has been exposed to air for a long period of time. The most common and unpleasant are a metallic taste, which often resembles iron or aluminum, or bitter or sour sensations. Common off notes include: 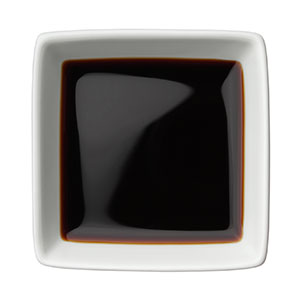