I decided to found Shiso Soy LLC after I realized that high quality, traditionally made soy sauce was virtually unavailable in the U.S., and that the available products left a culinary void in an era of great food, and particularly great sushi. 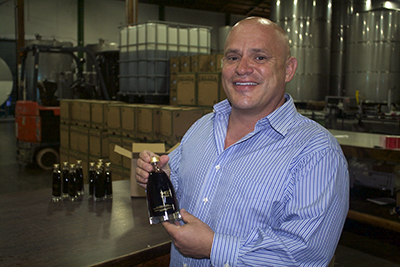 My earliest memories of soy sauce are from a Chinese restaurant in the basement of 11 Mott Street in New York City. About once a month our family would make a pilgrimage across the Brooklyn Bridge from our home in Brooklyn Heights to Chinatown. I remember the oddly shaped, greasy glass bottles with red plastic tops. They were filled with a thick black sauce with a strange taste that managed to be unbearably bitter, salty and sour, all at the same time. I quickly put soy sauce in the same category as hot peppers, raw onions, and sardines: things only an adult could enjoy.

When I was a teenager in the early 1980s my mother was a foodie, and particularly enjoyed sushi. Decent sushi bars were starting to appear in New York City, and sushi became a mainstay of our restaurant adventures. This was an era when even “good” sushi could still be hit or miss and even tasting a piece of uni had about a 50/50 chance of ruining your evening. Soy sauce was always ink black, served in a small ceramic carafe, and provided two flavors: salt and acid.

As sushi became more popular, I continued to enjoy it on as regular a basis as my finances permitted. I also developed a love of cooking. One of my father’s closest friends was a classically trained French chef and owned a highly regarded French restaurant. My first job as a teenager was doing food prep and minor cooking assignments at his restaurant.

I eventually became a lawyer and moved to San Francisco in 1996. I worked with tech start-ups and small businesses, including a few restaurants, bars and food producers. In addition to the dot.com scene, the Bay Area had established itself as an internationally recognized center for amazing food. As I had for years, I based many of my friendships and my social life around food and cooking.

One of my favorite “secret” ingredients has always been soy sauce; I use it as salt in braised dishes, sauces, and particularly with butter. One evening I was cooking away with some Kikkoman and began to wonder: why was there just one brand of soy sauce available in any of the stores I shopped at? Around this time I had also started going to Japanese grocery stores in San Francisco’s Japantown to buy fish to make my own sushi and sashimi appetizers. After searching around, I found a few bottles of imported Japanese soy sauces and started to buy and taste everything I could get my hands on.

After having a few soy sauce tastings with friends, and being more conscious of the low quality soy sauce served in sushi bars, it became apparent to me that the Americans needed and deserved better and more variety in soy sauce. The soy sauce available was, at best, mediocre. The US soy sauce market is huge – more than a billion dollars a year – and there was really only one branded product, Kikkoman. The product was solid but not great, and it only came in one style and flavor, while in Japan there were many to choose from. Imagine going to the beer aisle and only finding Budweiser. Low sodium soy sauces have become available, which strikes me as similar to Bud Light.

I soon became aware of another problem with soy sauce in the United States: it generally comes in enormous, cheap bottles and is perceived to never spoil. Technically, this is true. Soy sauce is so salty and acidic that virtually no dangerous microbes will grow in it. So people can open a bottle, use some, put the rest in a cabinet for a year, and then use it again without getting sick. Similarly, restaurants can (and typically do) leave open carafes of soy sauce on a table indefinitely, just topping them off when the soy sauce runs low. I shudder to think about how old some of the soy sauce was in the restaurant in Mott Street, and have the same concerns about many sushi bars now as well.

But while old soy sauce won’t kill you, it’s terrible for the soy sauce in other ways. Exposure to air, and particular oxygen, degrades the taste dramatically in just a short period of time. Soy sauce oxidizes, which causes a bitter, metallic flavor, and all of the subtle aromas dissipate, in much the same a bottle of wine tastes markedly different a day after it was opened.

The idea to turn soy sauce into a business happened in 2007 when I was spending a weekend at a friend’s house in Napa. I headed out to the local Dean & DeLuca to stock the kitchen, and went searching for a bottle of soy sauce. Even in this high-end grocery, the entire soy sauce selection consisted of two different sized bottles of regular Kikkoman on a bottom shelf. Above the soy sauce was the vinegar: over 60 different varieties, including more than 30 different Balsamic vinegars. I like vinegar, but the discrepancy of choice – 60 types of vinegar vs. one soy sauce struck – struck me as absurd. That’s when I realized: Like bottled water or flavored salt, this was a business opportunity that was hiding in plain sight. Consumers didn’t know they wanted high-quality soy sauce because the idea had never occurred to them. I resolved to be the person who let them know what they were missing and provide an opportunity to have better quality products.

Obsessed with this idea, I began to do research. When I asked people for their thoughts about soy sauce, most of them said they didn’t have any. It was mystifying that the most food oriented people I knew had never thought about it. Lots of people know vast amounts about what they eat, and restaurants and stores provide endless details about the food they serve. Still, as I conducted my one-man survey, I did not meet a single person who knew the four basic ingredients of soy sauce. Soy sauce is generally the only condiment people use in a high-end restaurant and it is poured on top of the most expensive cuisine available, and yet people know nothing about it.

Soon, I’d developed a dream of opening a soy sauce brewery. I researched the brewing process and realized that the complexity made it virtually impossible to produce a premium quality, artisanal product without years to dial in the process and a virtually unlimited budget. I have heard that the best way to turn a large fortune into a small fortune is to open a winery, and it looked like opening a traditional soy sauce brewery in the U.S. would be a similar experience. I realized I needed to create a market for premium soy sauce first by importing great soy sauces from Japan.

I made the final decision to launch Shiso Soy at a ridiculously expensive sushi dinner in London. The prix fix menu was over $200 a person for 22 courses. I was carefully tasting every delightful mouthful and felt cheated that the soy sauce was Kikkoman. There had to be a better way.

First, I worked with some friends living in Japan to arrange to visit breweries, meet the owners, learn the brewing process, and introduce the idea of importing their products. After eight years of fits, starts and disasters, and few months spent in Japan visiting breweries and learning about soy sauce, I finally have a great product ready for customers.